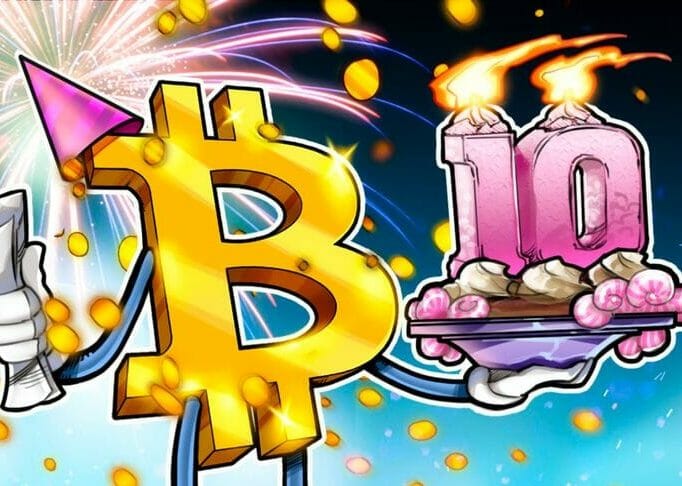 Today, Jan. 3, marks ten years since the creation of the very first block on the Bitcoin (BTC) blockchain.

Known in more technical parlance as a “genesis block,” the first block on a blockchain is unique in that it — logically — contains no reference to any previous blocks, and is always hard-coded into the network’s software, establishing all of the necessary variables required to create the ensuing blockchain.

Whereas Bitcoin’s theoretical foundations were laid with the publication of the Bitcoin whitepaper on Oct. 31, 2008, Jan. 3, 2009 heralds the first practical implementation of the world’s first cryptocurrency — the realization of a peer-to-peer and cryptographically secure system for transacting in digital cash.

The cryptocurrency’s inventor — the still-mysterious person or collective identified only as Satoshi Nakamoto — embedded the hexadecimal code of the genesis block’s coinbase with an encrypted Times headline from Jan 3, 2009, referencing the bailout of the United Kingdom’s banks. When decoded, this covert nod to the economic and political context that gave the impetus for the coin’s invention reads as follows:

The aftermath of the Lehman Brothers bankruptcy in fall 2008 had been the tipping point for economic turmoil, global recession and, subsequently, the controversial “too big to fail” rationale for state intervention. In the midst of this context, Nakamoto’s innovation proposed a bold alternative — a disintermediated, non-state-controlled digital exchange and store of value — to the ailing incumbent system.

Ten years on, the mystery enshrouding Bitcoin’s inventor remains as impenetrable as ever. Those both within and without the crypto community began attempting to determine Nakamoto’s identity as early as October 2011, just a few months after the mysterious figure first went silent.