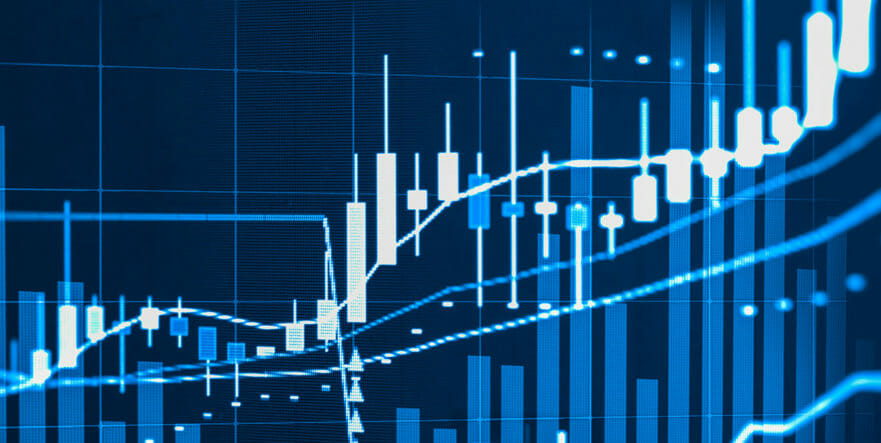 From yesterday things haven’t changed much for the cryptocurrency market capitalization as the evaluation has hovered around $221B.

As you can see from the global chart below the uptrend support was broken and we are seeing a start of a downtrend.

In my yesterday’s Market Update I have said that the breakout from this current range could indicate the future trend, but I wouldn’t count on any confirmations yet until the evaluation goes beyond the lower support line or the upper resistance line seen on the chart below. 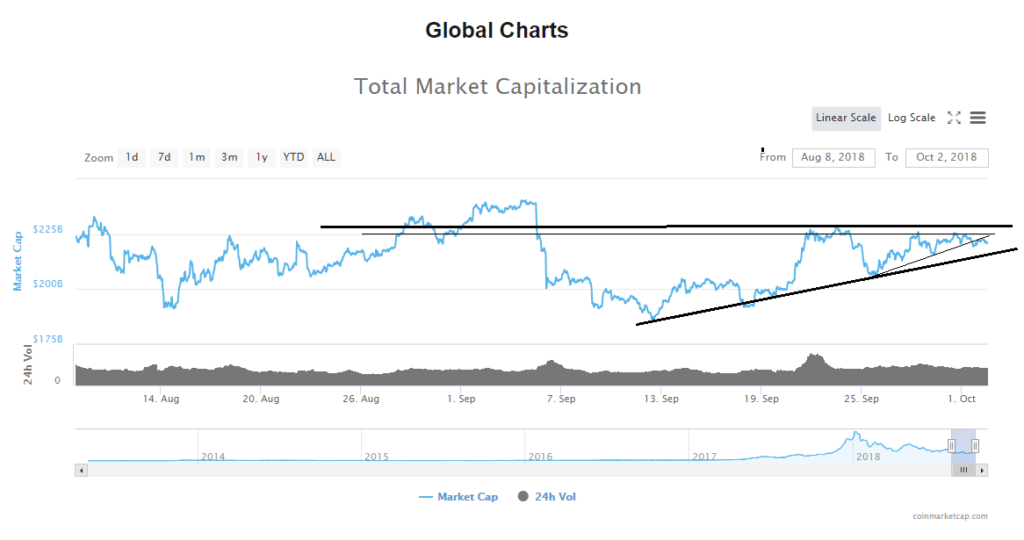 As the evaluation went below the first support line, in the upcoming period I would be expecting that it pulls back to the next which would be around $216B. That means I am expecting a further decline in prices.

Bitcoin’s market dominance evaluation which serves as an inverse indicator is interacting with the corrective wedge resistance line and if the cryptocurrency market goes further down as expected we are going to see a breakout on the upside and a trend continuation. 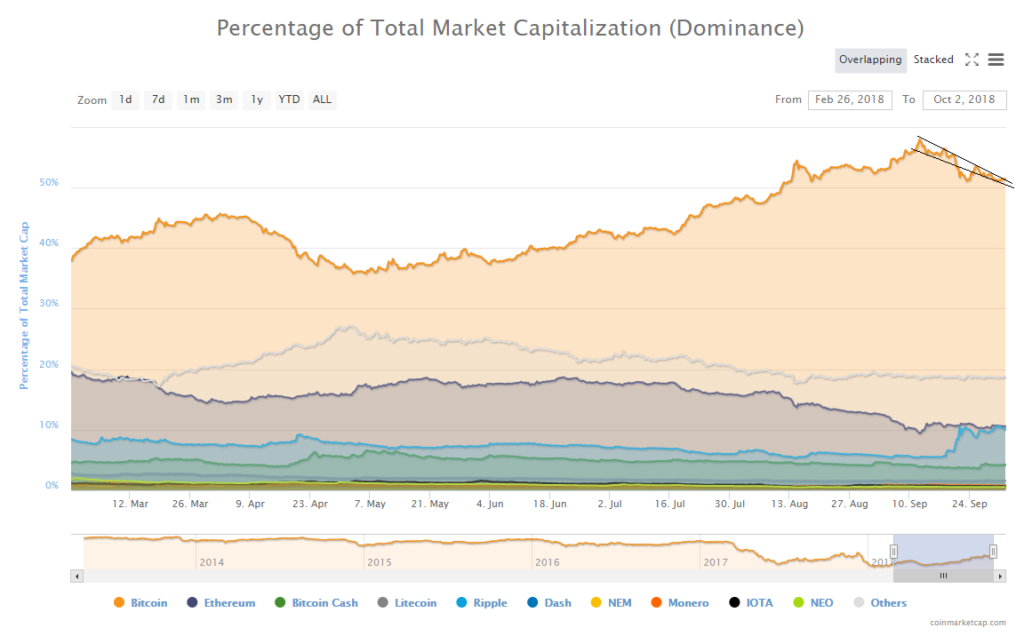 There aren’t any significant news that is impacting the market today, however, there are two major headlines worth mentioning.

Ripple’s xRapid went live today, according to CNBC. The product is for cross-border payments and they currently have three financial institutions signing an agreement to use the new platform: Mercury FX, Cuallix, as well as cooperative financial firm Catalyst Corporate Federal Credit Union.

The San-Francisco-based financial technology firm said Monday that xRapid, which uses the cryptocurrency XRP to carry out international transactions in “a matter of minutes,” is now commercially available.

The second headline that created a lot of buzz is the allegation of Huobi Exchange participating in the EOS voting, using the funds deposited by the users. As reported by cryptovest, a spreadsheet showing alleged voting pressures under which Huobi could sway the vote for EOS block producers is circulating the web. 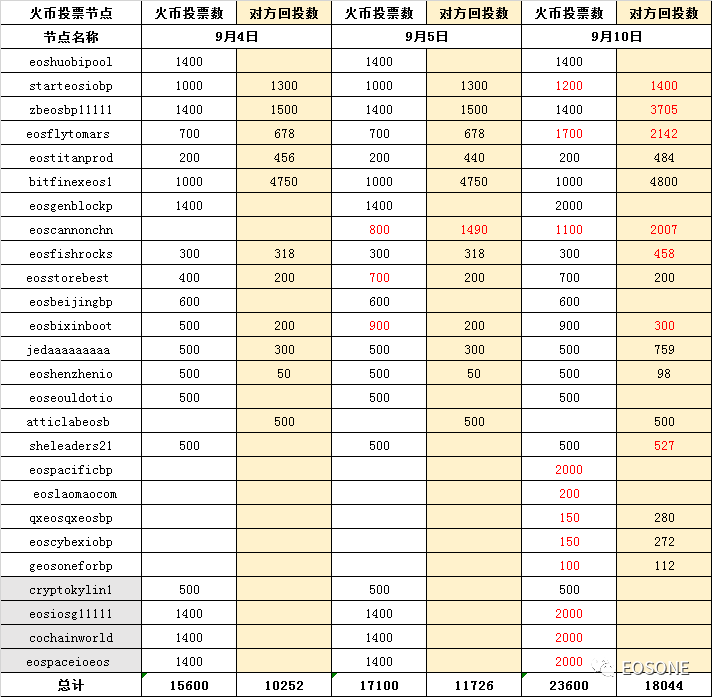 The most serious allegation, based on the table, shows that Huobi paid to receive votes and become established in its position. The other problematic proposition is that Huobi uses the tokens deposited on the exchange to vote, accruing daily kickbacks from block producers. There is no limitation in the EOS protocol or constitution that forbids exchanges from using their deposit wallets to vote.

The exchange has issued an official statement, denying any involvement in the voting process to obtain rewards and a Block Producer position.

Based on the initial investigation, there were no financial contracts involved between Huobi and any third party. The investigation is still on-going and therefore, we seek your patience and co-operation in this matter.

According to EOS blockchain statistics, Huobi is indeed one of the most powerful accounts due to its large-scale EOS ownership. So far, the exchange has not stated anything about using trader deposits for voting. However, the Huobi wallet is one of the largest among voters, and the Huobi block producer account is the most influential in terms of voting coins.

The third headline that caught my attention is that Chinese Bitcoin billionaire Li Xiaoli exits cryptosphere “for good”. This headline cough my attention, because I was recently watching Tone Vays’s podcast where he said that the bottom of the cryptocurrency market either will bring immense pain to the market participants causing them to rage quit or that Bitcoin’s low volatility would become boring enough that someone like Novogratz wouldn’t make any money and just leave the market.

From this day on, Li Xiaolai personally will not invest in any projects (whether it is blockchain or early stage),” was said in a statement, translated by TechNode. “ So, if you see ‘Li Xiaolai’ associated with any project (I have been associated with countless projects without my knowledge, 99% is not an exaggeration), just ignore it. I plan to spend several years to contemplate on my career change. As for what I’m doing next, I’m not sure just yet.”

The reason behind the sudden move was not disclosed by I doubt that an investor who made so much money in the cryptocurrency space is tired of making so much money down the line and wants to quit the whole thing altogether to pursue a career in another field.

From yesterday’s open at $6646 the price of Bitcoin hasn’t changed much as it only depreciated in price by 1.14%. 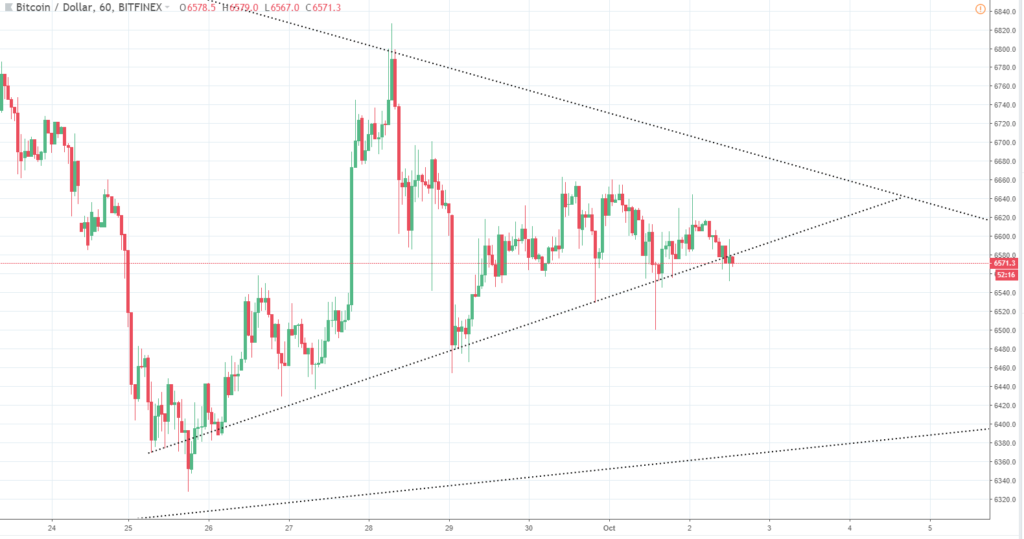 Currently, the price action is interacting with the minor triangle support line similarly like the evaluation on the global chart. It could be interpreted as the breakout happened and the support line has been retested from the below for resistance if the support line was drawn tighter, but I like to extend my levels to include the wicks as much as possible in order to have a proper confirmation when the breakout occurs. 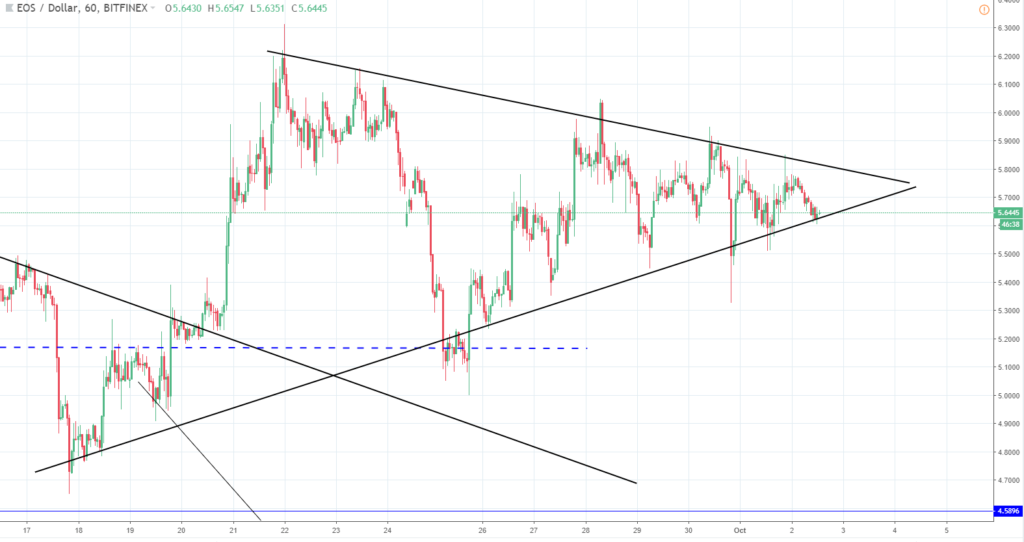 Looking at the hourly chart we can see a similar situation like on the other charts- the interaction with the triangle’s support levels. The price is currently on the minor range support, so we will see where the price goes from here, but judging by the steepness of the triangle’s support line buyers are more aggresive at this point.

EOS is in the sell zone. 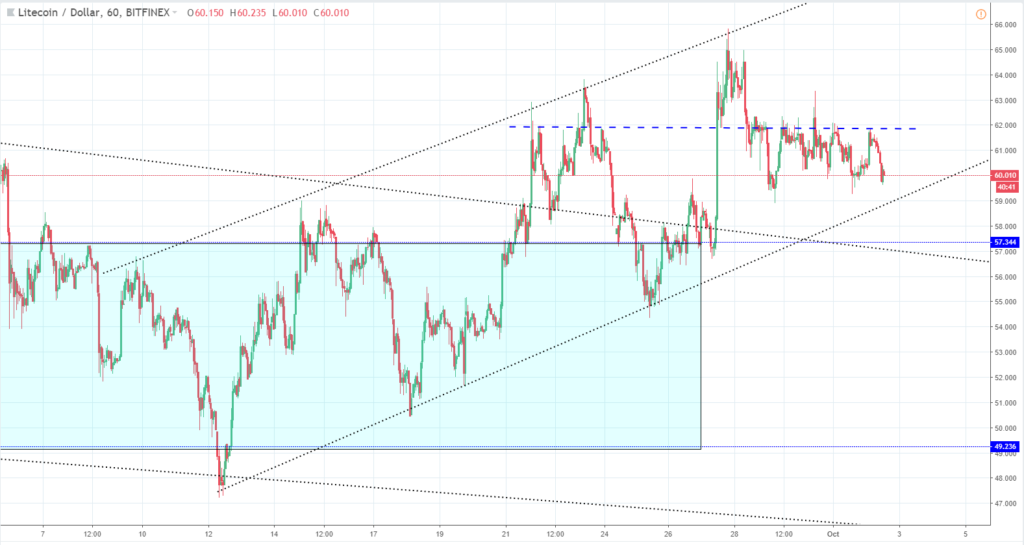 As you can see from the hourly chart the price has been rejected by the minor resistance level and has fallen to the minor range support level, looking for support. If the support hold I would be expecting a breakout from the current ascending channel on the upside and if it fails to hold a breakout on the downside. Because the price action is showing a slower momentum to the upside I and price action looks ‘unstable’ a breakout from the downside is more likely.

Like the other cryptocurrencies the technical indicators on the hourly time frame for Litecoin are signaling a sell with moving averages signaling a strong one.

Today if the market participants decide to take action and the day doesn’t go by calmly like yesterday, we are finally going to see a breakout from the current triangles that the prices of analyzed coins are. I am expecting that breakout to be from the downside as the charts suggest but another move to the upside before a lower low wouldn’t surprise me.