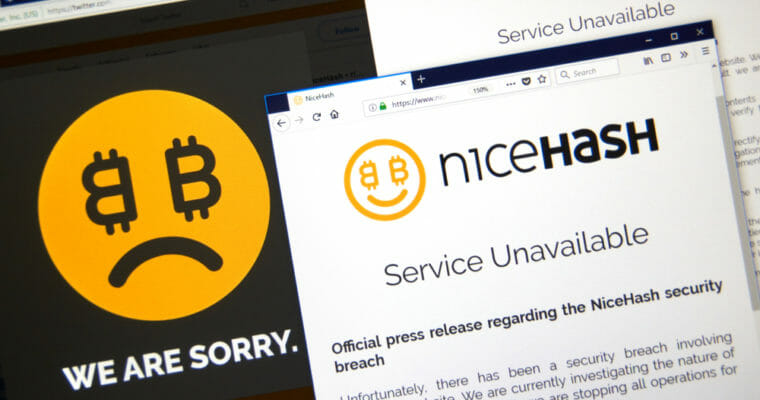 Slovenian bitcoin mining marketplace NiceHash has announced that it has successfully reimbursed 60 percent of all funds stolen in last December’s hack, which saw 4,700 BTC worth approximately $65 million stolen from the firm.

The news was announced in a post on its Twitter account, where it was revealed that the seventh reimbursement of its repayment program was completed on Wednesday, Aug. 1.

In a press release on its website, the platform also revealed that wallet users who were registered on the NiceHash platform before the Dec. 6 hack can log in to their account, where they will see an “old balance” tab under the wallet section on their dashboard.

Dear NiceHash users, seventh reimbursement of the Repayment program to all users is complete! ????

This tab, according to NiceHash, shows users the total bitcoin amount that users had in their wallet prior to the attack. NiceHash users using external wallets at the time of the hack are also included in the repayment program, with such users receiving instructions to view their old balance and monitor repayment progress.

A major frustration that has resulted from the situation is the substantial loss suffered by users due to the bitcoin price fall earlier this year. At the time of the hack, bitcoin was valued a $20,000, but in the intervening months, the bitcoin price has fallen steadily, currently trading between $6,000 and $7,000 during most of August.

In December, CCN reported that, two weeks after the hack, NiceHash came back online promising to reimburse all users in full via a monthly repayment process. The hack cost NiceHash CEO Marko Kobal his job, as he stepped down in January.

Explaining the move on his LinkedIn page, he said:

“As you are aware, since the recent security breach we at NiceHash have been working round the clock to rebuild our internal systems as well as management structure. I shall now stand aside and allow new management to lead the organization through its next, exciting period of growth – therefore I decided to resign as CEO of NiceHash.”

Slovenian police are still investigating the cyberattack, according to a report by local media outlet STA, citing information from the Ljubljana Police Department. It is expected to be a complicated and demanding investigation because the hackers involved generally do not reside in the country where the crime takes place, and they have several ways to hide their identities.

A quote from a press release cited by STA reads:

“Information gathering and other activity are still under way and carried out with the help of international legal collaboration.”