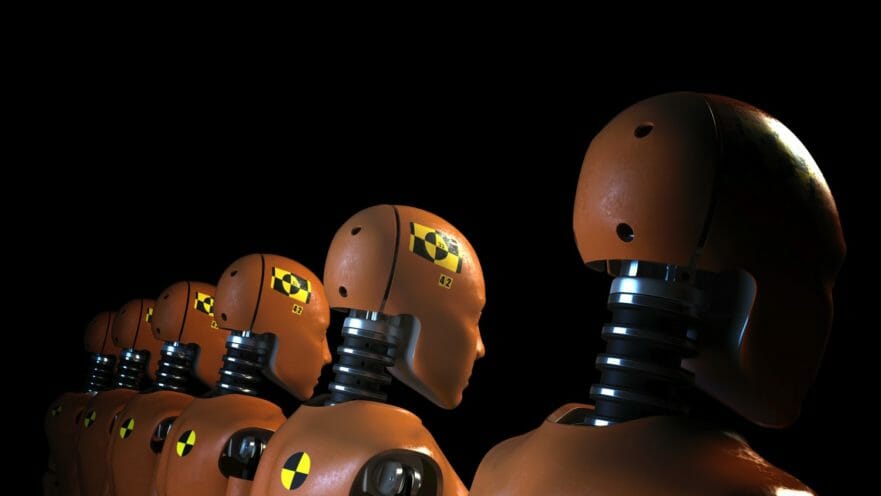 No matter how it’s examined, the cyclical nature of bitcoin’s price action can’t be ignored especially when considering its notorious “boom and bust” cycles.

If the latest plunge below the long-lasting support level of $6,000 after an explosive rise to nearly $20,000 is any indication, it’s clear the history repeating trend has yet to cease. If the cyclical nature of bitcoin is indeed alive and well, then, in all likelyhood, the current bubble will reach a similar conclusion as was the case with past bubbles.

This line of thought is potentially revealing since the breakdown of several bitcoin bubbles have followed an “opposite but equal” theme.

In other words, bitcoin’s price tends to consolidate in a specific pattern when in a bubble state, which eventually breaks down in the opposite direction to a near-identical distance as the height of the pattern.

Using this logic, a bottom for the current bear market can be extrapolated, as explored below.

A symmetrical triangle in technical analysis consists of two simultaneously converging trendlines, and is generally a continuation pattern in nature.

Like many patterns, a rough estimate for a triangle breakout or breakdown target can be predicted.

Generally, the pattern height is either added or subtracted from the breakout/down point to create a target, but with BTC, using the top-to-bottom distance of the base range (percentage) seems to be a more accurate unit of measurement.

A large triangle formed in June-July of 2016 with a 30 percent base range (left frame). Using the ‘opposite but equal’ breakdown/out logic from before, the price should bottom out 30 percent lower than the breakdown point.

As the left frame shows, the 30 percent drop was achieved almost exactly, to the tune of -29.5 percent.

The same measure rule came into play the following year when price formed another symmetrical triangle pattern. This example has the base range of 28 percent which, using the same measuring logic as before, provided the perfect bottom 28 percent below the breakdown point.

The bearish member of the triangle family is the descending triangle, which consists of a flat bottom and ‘descending’ top. This pattern, too, abides by the ‘opposite but equal’ breakdown rule.

Take the bear market of 2011 for example in the upper frame. Although the price action is not as clean – likely due to BTC being relatively illiquid on Bitstamp at the time – it’s clear that a descending triangle was the backbone of the market structure with a clear base at $5.43.

Once again, using the measuring logic from before, price should have fallen 26 percent below its breakdown point based off of its base range. As can be seen, BTC eventually did bottom out at a price level nearly 24 percent below the point.

As seen in the bottom frame of the above chart, the base range of this triangle is 65 percent. Perhaps unsurprisingly, when subtracted to the bottom of the triangle, another very similar ‘opposite but equal’ 62 percent drop marked the bottom of this market downturn.

Now, looking at the current 2018 bear market, history has already told us there is a high likelihood the price of bitcoin will breakdown from this triangle to a similar distance as its base range,

With that logic in mind, there are two possible targets for the current bear market bottom that can be created.

Since the base range of this descending triangle is 54 percent, a subtraction from the breakdown point of the triangle provides a target of $2,676.

Usually, this would be the ideal spot for the market to bottom (give or take a few percentage points) but since the price history above $13k does not fit in the triangle, a secondary target should be created due to the nature of bitcoin breaking down to an opposite but equal distance as its run up.

In conclusion, bitcoin’s price tends to follow an ‘opposite but equal’ rule when recording a triangle pattern breakdown.

Using that logic, an ideal bottom zone for the cryptocurrency’s most recent bear market is between $2,676 and $1,725 – give or take a few percentage points in either direction.

Source: When Bitcoin’s Price Breaks Down, It Follows a Pattern – CoinDesk