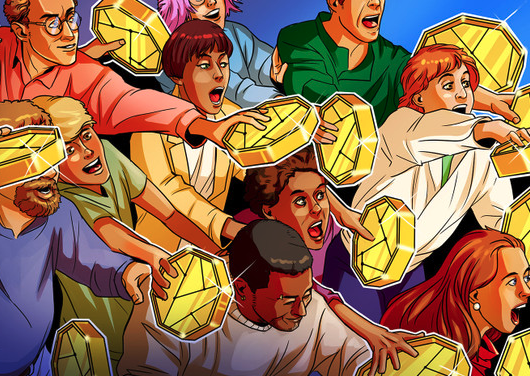 Dfinity’s “Internet Computer” tokens are finally tradable after five years in the making.

The launch of the Internet Computer utility token has seen a wild first day of trading after its long-awaited debut on exchanges.

The ICP token from Dfinity was listed on Coinbase Pro and several leading exchanges including Binance, Huobi Global, and OKEx on May 11.

Over four hours, prices for the newly launched token have swung from an early intraday high of $700 down to $250, before recovering 70% over 10 hours to trade for $425 at the time of writing. Coingecko estimates $1.8 billion worth of ICP tokens have traded just 14 hours since trade commenced.

The Internet Computer is a decentralized blockchain project by the Dfinity Foundation. Dfinity describes the protocol’s mission as expanding the functionality of the public internet from a network that connects billions of people through standard protocols to a publicly accessible global supercomputer based on its own ICP protocol.

It has the lofty ambition of replacing the trillion-dollar legacy internet and IT industry by allowing developers to install their code directly on the public internet — dispensing with hosting companies, servers, commercial cloud services, and tech monopolies.

Like Ethereum, the platform would allow developers to run computing applications on decentralized infrastructure. However, Dfinity claims superior scalability over Ethereum’s Layer 1 mainnet.

While Dfinity has been focused on building this Internet Computer since 2016, much of the project’s inner workings have been shrouded in mystery due to its policy of closed-source development. The platform’s Mercury genesis launch event took place on May 7, marking the public launch of the platform after its completed mainnet initialization in December 2020.

ICP tokens can be staked into its governance system to earn “voting rewards” or be converted into “cycles” that can be used to power smart contract computation. The Internet Computer platform runs on a Network Nervous System (NNS), which is an open algorithmic governance system that oversees the network and the token economics.

The system is broken down into several subsections which include the ICP tokens in addition to “neurons” and “canisters” which govern the network autonomously and are explained in much more detail on the Dfinity blog.

The project started fundraising before the 2017 ICO boom under the DFN ticker but has since rebranded to ICP.