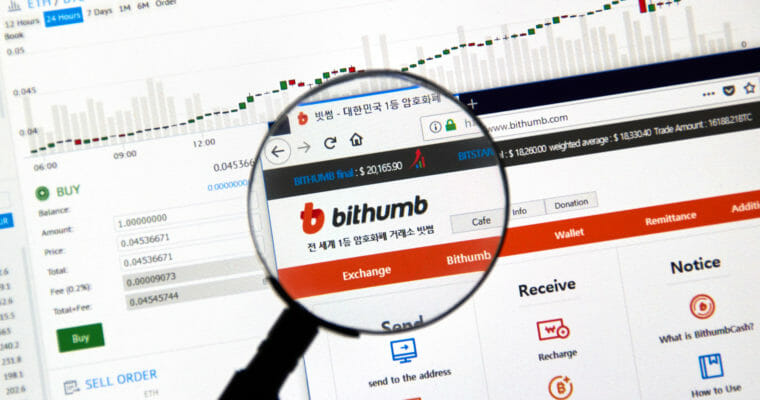 NH Bank, one of the largest financial institutions in the country, is set to sign an agreement with Bithumb on August 30 to provide virtual bank accounts to Bithumb users, which will allow new users to trade on the trading platform.

In South Korea, cryptocurrency exchanges are required to operate virtual bank accounts so that users can withdraw and deposit Korean won without having to directly deal with their respective banks for efficiency and security.

Since early 2018, as its partnership with NH Bank was dematerialized and it experienced a $40 million security breach which disabled deposits and withdrawals on Bithumb for a whole month, Bithumb has not been able to accept new traders on its platform.

“We have decided not to renew the contract because Bithumb still has problems in protecting consumers and information and preventing money laundering.”

As seen in its decline in profits in the third quarter of 2018, the trading volume and user activity of Bithumb stagnated due to its inability to support new users and facilitate trades in July.

But, this month, the government of South Korea approved UPbit, Bithumb, Korbit, and a few other cryptocurrency exchanges for having adequate security systems, which may have contributed to the decision of NH Bank to restore its relationship with the exchange.

The resumption of Bithumb registration will lead to an influx of capital in the crypto exchange market of South Korea, especially in the mid-term, as new investors that have previously been unable to trade will now be able to access Bithumb and its liquidity.

If Bithumb had failed to come to an agreement with NH Bank on a long-term relationship, then the government could technically ask the exchange to halt its services until it acquires a major banking partner.

In August, local mainstream media outlets reported that UPbit, the country’s largest crypto exchange, came out clean in the government’s search and seizure conducted in June. UPbit, which was suspected of inflating its balance sheet, employed a major audit and accounting firm to verify its cryptocurrency holdings and release the audit report to the public.

With the legitimacy of UPbit demonstrated to the public and the resumption of registrations by Bithumb, local investors have become more optimistic in the short-term trend of the market, considering that it has successfully recovered from the largest digital asset exchange hack in the country’s history.

Regional governments like Busan, Jeju Island, and Sejong are currently in the process of drafting friendly regulatory frameworks that are targeted at cryptocurrency and blockchain startups to create the next crypto valley.

The federal government has also reaffirmed its intent to facilitate the growth of the cryptocurrency and blockchain sector in the long run, as a part of its larger initiative to bolster the fourth industrial revolution.